This Time I Got Tattooed!

Yes, so I mentioned in my last post that I got myself a new tattoo last weekend.  I attended The London Tattoo Convention for the second time which was in its 8th year.  Last year I attended without the intention of getting tattooed as it was very last minute plus I already had two new ones completed earlier on in the year.  One being my arm which was started in Dec 2010 and finished in Jan 2011 and my ribs which I had last summer as a birthday present to myself.  I actually had it done the day before my birthday.  So it's been a while since I was last inked.  I was definitely itching for another.  Especially when you have a list of all the ones you want!  The only thing keeping me away is the cost.

I went knowing that I wanted to get tattooed and by whom.  Unfortunately I was too late when I emailed the guys at Spider Murphy's Tattoo a couple of months ago; they were already booked up. My only chance was to turn up super early to try and speak to them, flutter my lashes and somehow sweet talk them into tattooing me.  I'm happy to say something did the trick and the lovely Matt Howse squeezed me in between two of his pre-booked appointments.  It was either Matt or Paul Anthony Dobleman that I had wanted so I was one happy girl indeed.

Here I am being very ladylike with skirt hitched up high awaiting the needle.  I'm sure at some point I probably flashed everyone my stocking tops & suspenders but I was obviously way too preoccupied and in pain to notice!  When choosing my outfit that morning the only thing I thought about was making sure the back of my neck was accessible.  I very nearly wore a tight pencil dress! 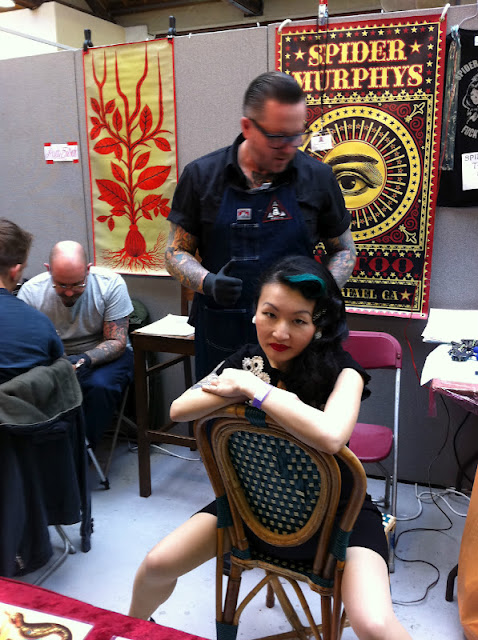 Tada! This is the new piece.  More boudoir inspired goodness to go with my arm.
There will definitely be more on this theme soon if I can help it. 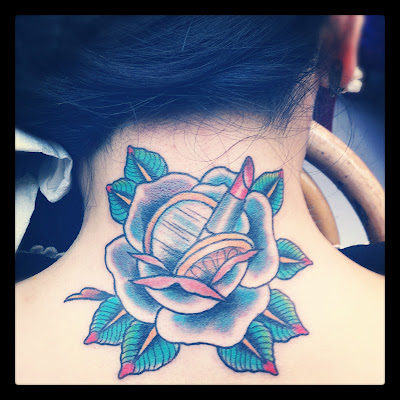 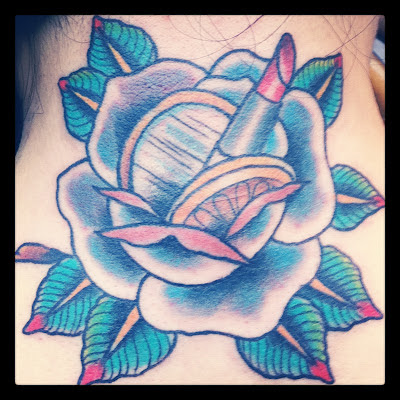 How do you like it?  I am really happy with the design.  I just love how you can tell an artist what you want to incorporate and they can whip up a drawing just like that.  I hadn't really pictured how the juxtaposition of the lipstick and compact mirror would work coming out of the rose but Matt has got it spot on.  Pretty much everyone who has seen it since has commented on how it is very "me".  I love that all my tattoos reflect who I am as that is exactly what I feel they should be.  They are now a part of me.  Not everything that is me but part of who I am.

I have to add, this has got to be the most painful session I've had.  I'm not sure if it was because of where I was being tattooed, Matt or I had just not expected that amount of pain?  It was definitely worst than my ribs which wasn't too bad for me but I was told beforehand it's one of the worst places pain-wise.  Oh well, it's over with now but just a warning for those thinking of getting something in that area too.  A rum and coke was on order straight after that!

Apart from getting tattooed and going round to all the booths to look at artists works and at work we went to this years pop-up cinema to watch the preview of Tattoo Nation.  The final cut is still being made for release early next year.  I didn't end up seeing any of the stage performances as a few were the same as 2011.  Lucky Hell the Sword Swallowing Showgirl was the only performer I really wanted to see but she didn't perform on Sunday.  Sad face. 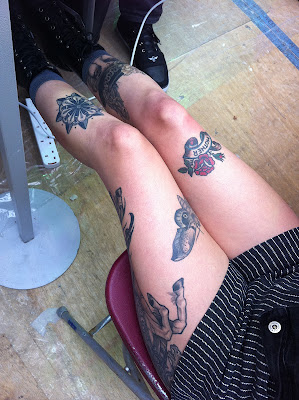 Tattooed legs above all by these guys at Scapegoat Tattoo Co who are amazing!
Would love to get tattooed by them one day. 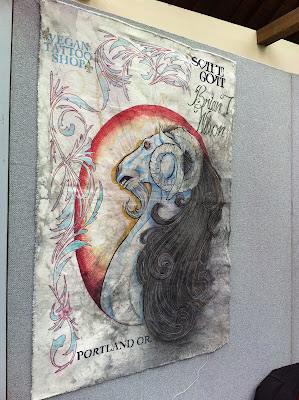 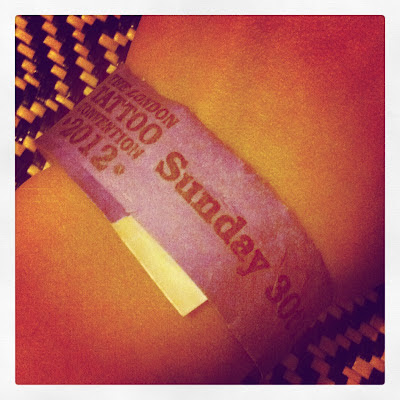 Some lovely flashes which I want to pick up. 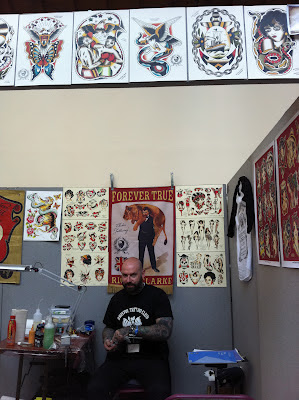 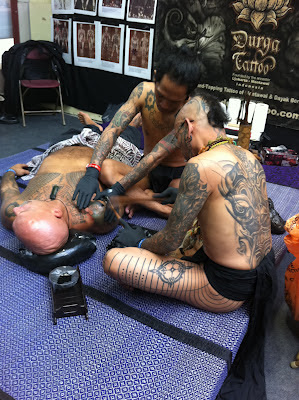 Matt and Paul at their stand 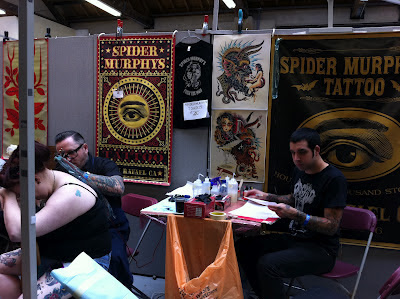 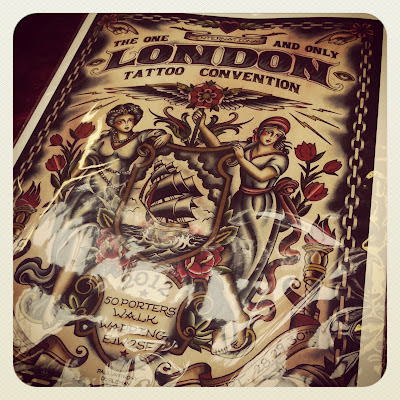 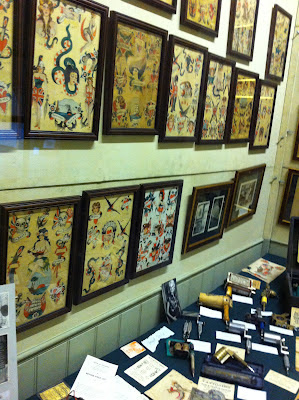 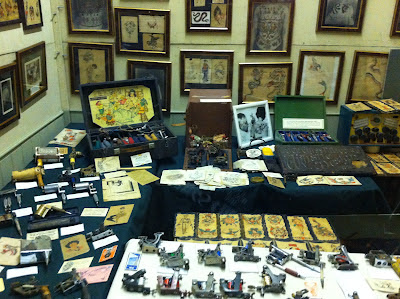 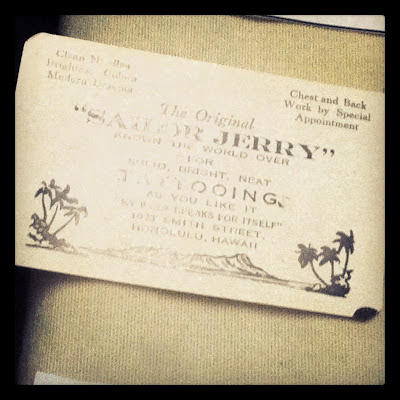 That was pretty much the day.  Spending the whole day there is fun but tiring.  I leave you here with a photograph of the girls and I at the annual pre-convention party held by The Family Business where we got just a bit tipsy! 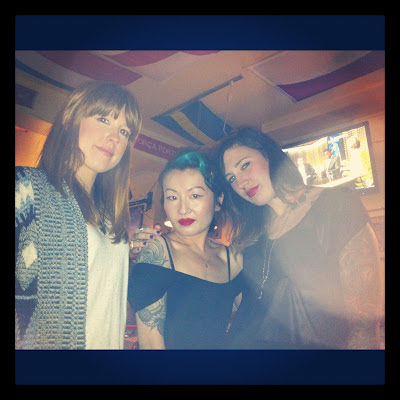 Posted by the The Dressing Parlour at 11:49

Well, you got yourself a great tattoo! I like it!

Thank you Juliette, I'm really pleased with it too :D

You chose a very beautiful tattoo! :) I like it!

Great tattoo. Lovely post, I've never been to the London tattoo convention. We have a yearly one in Norwich I managed to get to this year but sadly I was to poor to get a tattoo, but next time! I'd love something big on my back.

Thank you for all your lovely comments. It's great being able to go to the convention. Otherwise I would probably never get the chance to admire so many artists at work and to be tattooed by Matt either.

Any ideas on what you might want on your back Missy Vintage?