Last week I spent an evening at the theatre seated in the audience for a showing of Million Dollar Quartet.  It was fun, funny and a whole lotta rock 'n' roll all thrown into two hours. 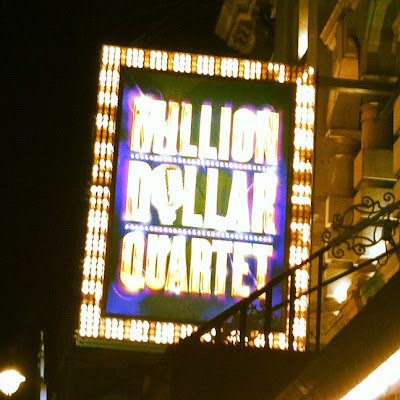 What is all the fuss about I hear you say? 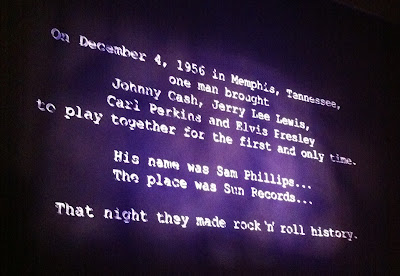 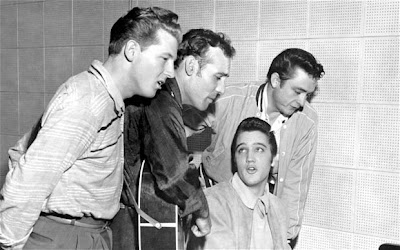 It was one of those shows where the audience really gets into it and at the end we were on our feet singing and dancing along.  How I wished it was real... that kinda rock 'n' roll show like they did them in the good ol' days!  People actually dancing to a live band.  The feeling is exhilarating and really nothing beats it for heart pumping feel good factor.


Here's a 30 second trailer of the show
This here is what's written on Wikipedia about Million Dollar Quartet - The jam session seems to have happened by pure chance. Perkins, who by this time had already met success with "Blue Suede Shoes", had come into the studios that day, accompanied by his brothers Clayton and Jay and by drummer W.S. Holland, their aim being to cut some new material, including a revamped version of an old blues song, "Matchbox". Sam Phillips, the owner of Sun Records, who wished to try to fatten this sparse rockabilly instrumentation, had brought in his latest acquisition, singer and piano man extraordinaire Jerry Lee Lewis, still unknown outside Memphis, to play piano on the Perkins session.


Sometime in the early afternoon, Elvis Presley, a former Sun artist himself but now at RCA, dropped in to pay a casual visit accompanied by a girlfriend, Marilyn Evans.[1] He was, at the time, the biggest name in show business, having hit the top of the singles charts five times, and topping the album charts twice in the preceding 12-month period. Less than four months earlier, he had appeared on The Ed Sullivan Show, pulling an unheard-of 83% of the television audience, which was estimated at 55 million, the largest in history up to that time.
After chatting with Philips in the control room, Presley listened to the playback of Perkins’ session, which he pronounced to be good. Then he went out into the studio and some time later the jam session began. At some point during the session, Sun artist Johnny Cash, who had recently enjoyed a few hits on the country charts, popped in. (Cash wrote in his autobiography Cash that he had been first to arrive at the Sun Studio that day, wanting to listen in on the Perkins recording session.) Cowboy Jack Clement was engineering that day and remembers saying to himself "I think I'd be remiss not to record this" and so he did and the rest is history. After running through a number of songs, Elvis and girlfriend Evans slipped out as Jerry Lee pounded away on the piano. Cash claims in Cash that "no one wanted to follow Jerry Lee, not even Elvis."
During the session Phillips spotted an opportunity for some publicity and called a local newspaper, the Memphis Press-Scimitar. Bob Johnson, the newspaper’s entertainment editor, came over to the studios accompanied by a UPI representative named Leo Soroca and a photographer.
The following day, an article, written by Johnson about the session, was published in the Memphis Press-Scimitar under the title "Million Dollar Quartet". The article contained the now-famous photograph of Presley seated at the piano surrounded by Lewis, Perkins and Cash (the uncropped version of the photo also includes Evans, shown seated atop the piano). This photo proves Cash was there, but the audio doesn't provide substantial proof he joined in on the session. 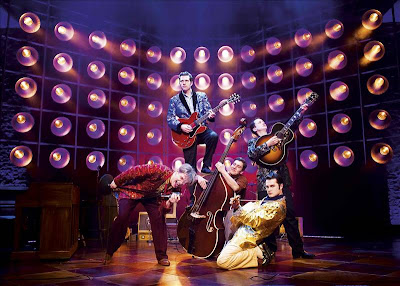 Posted by the The Dressing Parlour at 19:36